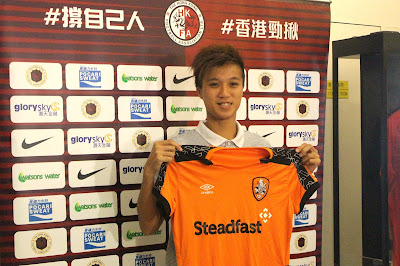 A few months ago I wrote a blog stating that I thought girls and women’s football in Hong Kong had turned the corner. We have had another example this week and many congratulations go to Hong Kong Women’s Representative Team player Wai Ki for getting a professional contract with Brisbane Roar in the Australian W – League. This is a fantastic achievement and I wish her well. Over the last few years I have taken pride in watching her and others in her cohort developing from players with enthusiasm and potential into really talented footballers. In that blog I highlighted how we had dominated the match against Singapore. Wai Ki was brilliant that day. I am so pleased that the girls and women are doing so well because their passion for the game is as intense as any male, as is their dedication and hard work.

This success is all the more remarkable when you consider that it’s only about five years ago that the HKFA took over the responsibility for girls and women’s football. We now spend many millions of dollars on developing this side of the game. To some people it’s not important but to me it is fundamental. Girls and women have just as much right as boys and men to play football and they derive an equal amount of benefit and pleasure from playing. Girls and women’s football is the fastest growing sport in the world and Hong Kong is at the forefront of this change. The phenomenal success of Coach Chan Yuen Ting and Referee Gigi Law are just two examples of Hong Kong’s preeminence.

Most of the credit for this transformation must go to our Women’s Football Manager, Betty Wong. She has been involved in football for a long time and I was delighted when she decided to join us fulltime in May 2013. Since then she has established girls youth leagues, a women’s league and HKRTs at U12, U14, U16, U18 as well as further enhancing the senior women’s team. Betty has done an amazing job and we are lucky to have her.

I hope that Wai Ki is the first of many ‘exports’ to professional women’s leagues because she will undoubtedly develop even more by training and playing at a higher level. This can only be good for us moving forward. It will not be easy for her either personally or professionally and we should give her as much support as possible.

When I eventually look back on my time in Hong Kong I know that the growth of the women’s game, and the improvements we have made, will be one of the things that gives me most satisfaction. Good luck Wai KI, do yourself and Hong Kong proud.

So Near But Yet So Far

Football is a game of fine margins. I am writing this on the plane back from Malaysia the day after our Asian Cup Qualifier. It was always going to be a close game; the last two matches against Malaysia also finished 1-1. To be honest the first half was a bit uneventful with both sides trying hard, making a few mistakes and not really creating many clear cut chances. However, the second half was anything but dull!

We took the lead early in the half with an excellently crafted and finished goal but we were unable to hold onto the lead for long when they scored a somewhat fortuitous goal four minutes later. It was unlucky for us that the ball deflected into the path of an unmanned player in the box from a blocked shot, and he was left with just our keeper to beat. If I was being harsh I might ask why he was allowed so much space in such a dangerous area and this is something that we will have to work on.

After that the game was very open and entertaining with end to end action and both teams created good chances. Then came one of those fine margins on which games turn. We had a nice little interchange of passes and Alex made a well-timed run into the box with just the keeper to beat (which he did) only to be given off-side. My initial instinct told me that he wasn’t off-side and I believe the replays show that he was in fact on-side when the ball was played. As readers of my blog will know, I don’t criticise referees and this was one of those genuine mistakes that happen from time to time. We created enough chances to win the game anyway including one glorious open goal!

There was more drama to come when in stoppage time Alex was fouled in the box and the referee rightly awarded a penalty. At that point the behaviour of the Malaysian coaches and players was very disappointing. OK, it was the heat of the moment but their players surrounded and berated the referee for several minutes which is unacceptable. Taking a penalty at 1-1 in stoppage time is a pressure situation and the unnecessary delay and unsportsmanlike behaviour can only have made the situation worse. Perhaps that was the plan. Full marks to Sandro for having the courage to step up to take the penalty and full marks to their keeper for making a good save. We just missed from the rebound confirming again that small margins determine the outcome of matches. At the end of the day those two points dropped could make a difference in terms of qualification. It could have been, and arguably should have been very different.

To be blunt there were disgraceful scenes at the final whistle with their Coach, his assistants and a number of the players virtually assaulting the referee. The fact that the Coach could not control himself influenced the other team officials which in turn incited the crowd. It was shocking to see the referee being escorted from the field of play in a barrage of verbal abuse and missiles. Imagine their behaviour if the referee had actually made incorrect decisions against them. If anyone should have been upset it was us because of the earlier incorrect offside decision. The AFC must take some action to prevent this sort of thing happening again and to give support and protection to match officials. Yet again I was left dismayed and angry at the behaviour of people who should know better. It was embarrassing for my hosts from the FAM who at least had the courtesy to apologise to me later.

I said in a previous blog that we were given a tough draw and that it would be difficult to qualify. It still looks that way and three points would have been very handy - it could so easily have happened too if it weren’t for those fine margins. And so the overriding mood in the camp last night and this morning was one of disappointment. Although frustrating we must remember that it’s not over yet and we will continue to fight for qualification.

In typical sensationalist style I note that some of the media are calling for Coach KIM to be sacked. That’s pretty disgusting and disrespectful. It also shows a complete lack of understanding of the situation. Coach KIM has a contract which runs until next summer. His salary is paid for by the Government. If we were to sack him (even if it were justified, which it is not) we would have to pay him six month’s salary in compensation. We would not be able to replace him because the Government would not agree to pay KIM’s compensation and the salary of a replacement. So we would not have a coach for the remainder of the Asian Cup qualifiers - how sensible would that be? So everyone should just shut up and get behind Coach KIM and his team. He is not going anywhere unless he, himself decides it is time to leave. The HKFA will decide on his future at the appropriate time. I hope that ends the ridiculous speculation.

Another issue that seems to generate a lot of debate is the use of ‘naturalised’ players. I know KIM is acutely aware that his selection of so-called ‘foreign’ players is not universally popular. Most countries in most sports have ‘naturalised’ players and we should remember that it is more difficult for a foreign player to become eligible to represent Hong Kong than it is in virtually any other country. Someone who has been in Hong Kong for at least 7 years (plus the time it takes to get a passport) and given up their original nationality should in my opinion be welcomed and accepted. The resentment even seems to apply to those players who were born in Hong Kong or have lived here since they were toddlers. I can’t understand the attitude myself.

I don’t get involved in selection matters but I have told KIM to pick his best team from people who are eligible to represent Hong Kong.  If we want to be successful, that in my opinion, is the only policy to follow. In time things will change anyway, as the standard of local football gradually improves. The ‘local’ players who represented Hong Kong in Malaysia played very well especially the two young substitutes Wong Wai and Tan Chun Lok. I went to the two recent interport matches against Macau last week, which we won. Again the ‘local’ players did very well and showed huge promise. It is very encouraging.

The future for ‘local’ players is looking bright which is great and what we all want. We should not forget however that ‘foreign’ players and coaches have been instrumental in helping these local players to develop and improve as happens in most places around the world. This is especially true of one Mr KIM who has devoted most of his professional life to helping Hong Kong football. It’s about time more people got behind him and all of the Hong Kong players irrespective of where they were born.