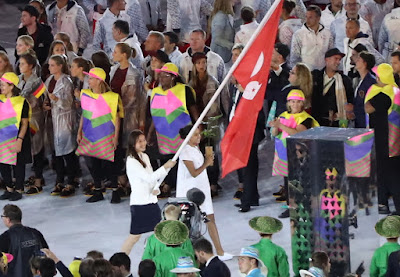 As most readers of this blog will know, I grew up in England. As a young child in the late 1960s and early 1970s I instinctively knew that sporting success was part of GBs heritage and culture, it was ingrained and just acknowledged. With, what in retrospect seems like arrogance, we believed we had ‘invented’ most sports and had a right to be good at them. Well, we had just won the Football World Cup! I grew up in a sporting household, my father had been a professional cricketer and physical education teacher. Together with my older brother, I spent every waking hour, when not at school, playing as much sport as possible - cricket, football, swimming, table tennis, snooker, you name it we played it. In my formative years, school sport was important too. We played against other schools after hours during the week and at weekends we often played for the school in the morning and a local club team in the afternoon. Millions of boys were just like me – we all wanted to be the next Bobby Moore, Bobby Charlton or in my brother’s case Geoffrey Boycott.

And then towards the end of the 1970s and into the 1980s there was a change of culture. The liberal-minded people in charge of education decided that competition was bad, because not everyone was capable of winning! Winning was suddenly bad apparently. This change of policy, coupled to teachers refusing to take extra-curricular activities because of a dispute with Margaret Thatcher, led to a steep and immensely damaging decline in GB sport. In a short space of time, we went from world beaters to a nation of heroic failures, personified perfectly by ski-jumper ‘Eddie the Eagle’ in 1988 (if you haven’t seen the film by the way, watch it; it’s brilliant). By that time I had followed my father’s footsteps into a career in sport and for someone who loved sport and reveled in its many intrinsic benefits, the decline was humiliating and depressing.

The slide was brought into sharp focus in 1996 when at the Atlanta Olympics GB finished 36th with a mere 9 medals in total and only 1 gold. That was won by rowers Pinsent and Redgrave whose success was based solely on supreme talent, enormous physical prowess and extreme personal sacrifice. It owed absolutely nothing to the sporting establishment. Sport received very little political support or funding.

Wind the clock forward 20 years to the Rio Olympics. Team GB finished second in the medals table (ahead of China), smashed their targets and became the first ever country to increase the number of medals won having hosted the previous Games. Of the 366 athletes that went to the Rio Games for Team GB, 129 of them - just over 35% - returned with a medal, including every member of the 15-strong track cycling team. Of 31 sports, GB finished on the podium in 19 - a strike rate of just over 61%. In terms of golds, GB was way ahead of the pack, finishing with at least one in 15 sports, more than any other country, even the United States.

This is a remarkable turn-around and has left many people around the world scratching their heads wondering – ‘how have they done it’?

Success in sport is not rocket science. I believe it only needs two things; cultural significance and resources.

Dealing with resources first, it is absolutely clear that the catalyst for the profound improvement and success of GB sport has been the introduction of the National Lottery and the use of a set percentage of funds raised specifically for sport. This has gone into; building world class facilities, the hosting of major events (Commonwealth games 2002 and 2014 and the Olympic Games 2012), funding for Governing Bodies and to pay the training and competition expenses of individual athletes. National Sports Associations have been able to employ expert coaches and to fund the sports science support services that are so vital to athlete progression.

No sport demonstrates this better than cycling. GB dominated track cycling in Rio, winning six of 10 disciplines and collecting 11 medals in total, nine more than the Dutch and Germans in joint second. GB success in cycling transcends the Olympics too as demonstrated by Chris Froome’s success in the Tour de France. Their amazing success has been built on a strategy of ‘marginal gains’ where basically nothing, and I mean nothing (google it and you will see what I mean), has been left to chance. There is no doubt in my mind that with the right resources their success can be copied and replicated. However it is impossible to do so without money.

What hasn’t attracted as much attention as the impact of the National Lottery is that there has also been more investment in school sport in the UK. Specialist Sports Colleges have been established and importantly, links have been made between schools and local sports clubs. Pathways to NSA talent identification programmes have therefore been facilitated.

In terms of cultural significance, what is interesting is that the success of Team GB i.e. elite sport has been achieved without a corresponding increase in mass participation. Grass roots participation in sport has actually declined in many sports (not cycling) in the UK, even after the Olympic Games in 2012. It just goes to show that there is no direct correlation between the absolute number of people playing sport at the base and the level of success at the top. The sports development continuum is not necessarily a pyramid, but more of a ladder. The secret is identifying those with talent (at a very early age), exposing them to the right (sporting) environment and providing them with the resources (time and expert advice) they need to climb from one rung to the next. No stone unturned, nil compromise.

So why is the cultural significance of sport so important? Well for me if the decision-makers are going to take sport seriously they need to be confident that the majority of the population of a country appreciate that sport is important, even if most people have no aspiration to be world-class themselves. The majority of people in the UK know they will never win the lottery or Olympic Gold but they are happy to buy a ticket in the knowledge that the proceeds will go to ‘good causes’. A country needs politicians who understand the value of sport and are prepared to develop a coherent strategy and divert resources to make it happen. Success in sport needs to be part of a nation’s DNA like it used to be in the UK and like, thankfully it is once again. Success breeds success.

In terms of Hong Kong, I just don’t see that sport has reached that level of cultural significance (yet). It’s just not that important to people, to society and therefore to politicians. As a result sport does not receive the same level of recognition, priority or the all-important resources. Of course it would not be true to say that no resources or thought go into sport in Hong Kong. We have the HKSI for elite athletes, we have some new facilities (such as the Velodrome) and more in the pipeline hopefully (such as a new Stadium). We have a new Sports Commissioner who understands sport, which is a step in the right direction. We have the SF & OC that overseas NSA activities. We have the HK Schools Sports Federation etc. We have the HK Jockey Club that administers horseracing and football betting and puts money into sport. In recent years the HKFA has benefitted from additional funding as a result of a more strategic approach and better governance, so it would be churlish for me to say that there is no sporting culture at all.

The reality is though that these are only strands and facets of a sporting infrastructure. Are they enough and are they joined up as part of a coherent sports strategy? Having witnessed firsthand the Renaissance of sport in the UK, I would have to say ‘categorically no’. In my opinion, there are a number of things that Hong Kong needs to do:

Hong Kong was one of the 119 countries not to win any medals at Rio 2016, so we are not alone. However many of the countries that did win medals have a smaller populations than Hong Kong and less ability to provide the necessary resources. There should be no excuses if we want to improve. It took twenty years in the UK for the transformation to happen. In all probability it would take longer here because we are starting from a lower base. The point is that if we don’t make a start now, it will never happen. If Hong Kong is to enjoy any sustained success in sport, we must all join forces to develop a sporting culture and to devote more resources to sport.

Rio is not Hong Kong’s ‘Atlanta’ because we have different cultural expectations, but we must find a catalyst from somewhere.