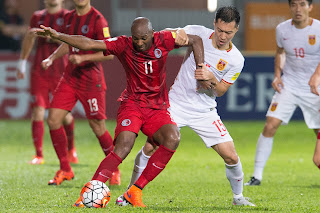 I note with concern and disappointment that the mainland tabloid Global Times has criticized the behavior of the Hong Kong fans and called for FIFA to impose ‘severe penalties’ against the HKFA. I would like to make a few observations about this:

·         Firstly they are trying to make a mountain out of a molehill. Most observers agree that the vast majority of fans from both sides behaved impeccably and that generally it was a good natured, if lively crowd. At one point both sets of fans even participated in a Mexican wave. Any negative behavior including booing the anthem and jeering opposing fans was actually limited in scale and took place before the match. During the match and afterwards there was no trouble at all.
·         The Global Times fails to recognize that the negative behavior referred to above was largely incited by the ridiculous CFA poster campaign. It may also have been exacerbated by the rather arrogant statements made by certain members of the China delegation before the match that they would be going home with three points. That was disrespectful and unsporting. Maybe the fact that some humble pie was necessary after the match has led to this latest stance. I wonder, would they be demanding this action had they won the match?

·         Personally I don’t think it is appropriate for a newspaper to be seeking to influence FIFA, they should report the news, not try to create it. One of the things that sickens me most when watching a football match is when players try to persuade the referee to caution an opponent. This is tantamount to the same thing.

·         I believe the Global Times is state controlled. Article 17 of the FIFA statutes confirms that ‘Each Member (Association) shall manage its affairs independently and with no influence from third parties’. Perhaps they should be a bit careful in this regard. Fortunately I have no doubt that FIFA will make its own decisions (which I accept could be a further sanction) and will simply ignore this petulant request.

I also believe that the CFA has lodged a complaint with FIFA about the alleged ‘ghost’ goal. Seriously, what is the point? The match is over, get over it, the result is not going to be changed. Hong Kong was on the receiving end of an abysmal decision in our recent match against Thailand. We could have complained but we didn’t. Similarly we could have complained about the fact that one of the China players was only booked and not sent off for a cynical and clearly premeditated horror tackle on Jaimes McKee in the first minute. We could have complained that our goal was disallowed when their goalkeeper fumbled the ball and fell over, we didn’t. I can understand why they are upset about the decision but this is football. As I stated in my previous blog, if you are going to play sport you have to accept that occasionally you will be given harsh and sometimes incorrect decisions.

The poet Rudyard Kipling put it more eloquently than I can when he wrote…”If you can meet Triumph and Disaster, and treat these two imposters just the same……you’ll be a Man, my son”.