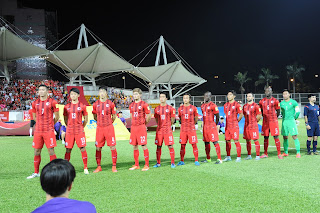 It would have been a brilliant comeback but sadly, it was not to be. What I would like to say first and foremost is that the fact that we are disappointed to lose a match like this shows just how far we have come in a relatively short period of time. Qatar won its last match 15-0, they are ranked in the top 100 and 57 places above Hong Kong. At the end they were hanging on and their Coach was pleading for the final whistle.

We all feel a bit flat today which is not surprising but looking at things objectively we should be pleased and proud of how well our team played and how they gave a fright to one of the better teams in Asia. We have made great progress recently and the fact that we could come back at the end speaks volumes about both the team spirit and the improved physicality of our players.
I don’t want to dwell on the referee’s performance because it is a difficult job and we all must accept that at times we take the rough with the smooth (some decisions undoubtedly went our way against China). I must say however that the decision to penalize our goalkeeper for delaying clearing the ball was a bit harsh. I have rarely seen this decision made and never without issuing a warning first. It was almost inevitable that it lead to the first goal. But let’s focus on the positives.

It would be remiss of me not to mention the crowd and the support given by the Hong Kong fans. When I turned up at Mong Kok two hours before kickoff there was already a large crowd and a palpable buzz around the stadium. From start to finish the fans were magnificent and I know this gives a huge lift to the players. It’s a cliché but it is like having a 12th man on the pitch. There seems to be a resurgence of interest in football at the moment which is great and we at the HKFA must try to capitalize on this. I am sure the match against China in November will take this to a higher level altogether.

I think it is obvious to everyone, it certainly is to me, that the Hong Kong Representative Team is getting better. This potential was always there but the fact that it is now coming to the surface is really encouraging. What I’m more excited about however is that there is more to come. The changes we are introducing to the structure of football and the pathways for talented players will improve things in the future. Things will get even better when we have our own dedicated Football Training Centre and more sophisticated sports science support.

There is no doubt in my mind that Hong Kong football at all levels is on an upward trajectory. If we continue to build on this momentum the many football fans in Hong Kong will have many more great performances to cheer.